When the Great Days Come

Isaac Asimov's Laws of Robotics, according to some EU member states, are Essential Health and Safety Requirements that should be incorporated into the EU Machinery Directive thus: '(ii) improve the current Directive by incorporating Asimov's laws45 into the EHSR of the Directive', where footnote 45 quotes the Three Laws – though not the johnny-come-lately Zeroth Law – in full. (7 May) [LK]

Jerry Cornelius is enjoying several Further Adventures, including a new story by Michael Moorcock himself, at www.faojc.com. [MR]

Larry Eisenberg, still going strong at 98, protested that his SF Encyclopedia entry gave him a spurious middle name (lifted from the Internet SF Database, where it had leaked across from the other Lawrence Eisenberg). After fixing this I was rewarded with one of his famous limericks (see New York Times):

Middle name Benjamin does annoy,
There's been none since I was a boy,
Its wrongful bestowal
Did irk on the whole,
Your effort has given me joy.    (26 May)

Ursula K. Le Guin was remembered at the SFWA Nebula Awards Weekend banquet in May, where every place-setting included a little blue badge with the legend THANK YOU, URSULA. [Update, 2 June: I'm told that this was arranged by Ellen Klages.]

Philip Pullman was named author of the year at the British Book Awards for The Book of Dust: La Belle Sauvage; the illustrator of the year is Axel Scheffler of Gruffalo fame. (BBC, 17 May)

George Saunders's Lincoln in the Bardo is the one genre contender in the shortlist of five for the Golden Man Booker Prize, showcasing past winners 'that have best stood the test of time'. [L]

H.G. Wells appeared in an unexpected context last month, as the cover photo of Oregan Publishing's free Kindle ebook of The Shadow over Innsmouth by H.P. Lovecraft. He's a deep one, that Wells.

As Others Date Us. Alexandra Borowitz chose her top five authors for Shelf Awareness, beginning with: 'Margaret Atwood, because she's essentially the godmother of dystopian science fiction.' (4 May) [AIP]

Science Masterclass. 'As an asteroid (a kind of giant starship) flies through the stars ...' (Publishers Weekly description of Poul Anderson's Tales of the Flying Mountains, 1970)
• 'Volcano on Hawaii may spew fridge-sized refrigerators.' (Newspaper headline for AP story, May)
• 'The findings [...] suggest dandruff evolved sometime in the late Jurassic period' (i, 26 May. Hazel: 'Later it learned to hunt and fish.' Me: 'And still later became President of the United States.')

We Are Everywhere. Yes, it's satire: 'UK Brexit proposals nominated for Hugo Award in Fantasy category' (Newsthump.com, 29 May) Please don't all write to tell me that there is in fact no such category.

Outraged Letters. Chris Priest on A370: 'Traditional old-fart comment (with apologies): from the depths of my lifetime's familiarity with the SF world, of this month's RIPs I recognize only one name, and that is Madame Gollancz ... who famously wouldn't have anything to do with the Gollancz sf list.' (1 May) But familiar names are more painful.

Pubwatch. The Edward Lear pub in Islington reopened on 3 May with a new name as 'tribute to two of the locale's most famous sons': The Owl & Hitchhiker. See www.owlandhitchhiker.pub. [DH] Thematic features include Pan Galactic Gargle Blasters and runcible spoons.

Court Circular. Tony Perez of Tin House reports a 'sovereign citizen' submission that laughs heartily at the rights of mere editors: 'Should you continue to enforce your policy as it is emphasized in the Writers' Market and on your website in the Submissions Guidelines section, please mark my submission as "rejected as unagented" and let me know immediately. I would be happy to send you the proposed declaratory judgment action I included with the packet forwarded to WGAW so your legal staff can prepare whatever arguments they think the federal court will tolerate. Blackballing me will constitute the majority of the damages such a suit would engender, so please consider this submission in the light in which it is delivered, ergo, a good faith effort to demonstrate that you may be breaking the law and have a chance to correct it voluntarily by realizing the book submitted outside your policy is the template for freeing all Americans who have been subjected to patterns and practices which deprive them of the freedoms governments are instituted to protect.' (Twitter, 18 May) Coo er gosh.

The Weakest Link. Q: 'Which legendary English figure stole from the rich to give to the poor?' A: 'Dick Turpin.' (ITV, The Chase) [PE]

As Others Remember Us. 'I was just thinking of George Orwell's 1984 and wondering which animal you would be.' (Danny Mills, Radio 5 Live) [PE]

Random Fandom. Hazel Ashworth is now Hazel Ashworth West, in memory of her late partner Don West.
• Follycon (Eastercon 2018) created enamel pins for members who also attended Follycon in 1988, and there are some spares for 1988 members who didn't join the 2018 con. Ask chair@follycon.org.uk, giving your name, address, and 1988 name/badge name if different. First come first served.
• London First Thursdays: the page at news.ansible.uk/london.html has been updated to note the awkward fact that meetings are currently held upstairs with no wheelchair access. [CM]
• Steven H Silver's long-running SF Site news page is officially 'on hiatus'. (www.sfsite.com/news, 14 May)

The Dead Past. 40 Years Ago: 'Screen Actors Guild has filed a $25,000 lawsuit against Gene Roddenberry, his Norway Corp. and Paramount Pictures for what the union says is an illegal exhibition of a Star Trek TV pilot and seeks an injunction against Roddenberry's showing of the blooper reel. The reel "makes the actors look ludicrous." The article in Variety gives no mention as to why the actors are complaining now, 10 years after the blooper reel was first shown.' (Karass 37, June 1978)
• 10 Years Ago at Cracked.com: 'If you've been in any bookstore in your lifetime, you're probably familiar with that most peculiar of book retail locales: the Fantasy & Science Fiction section. This strange and sweaty place is kept separate from the rest of the bookstore so that its residents, the soap-averse fans of Fantasy & Science Fiction novels, can go about their plots and dark rituals without disturbing any of the normal-smelling clientele.' (Ansible 251, June 2008)

Thog's Masterclass. Similes in Space. '... and the unfiltered vacuum tightened around me like bathwater.' (Jaroslav Kalfar, Spaceman of Bohemia, 2017) [IS]
• Super-Ova Dept. 'Millions of eggs circumvent a small green planet.' (Ibid) [IS]
• Pause During Infodump. The President of the USA speaks: 'Please go on. As for its being confusing, it is a bit complicated. But I get it all in a sort of – of fuliginous adumbration!' (Harry Stephen Keeler, Cleopatra's Tears, 1940)
• Déjà Vu Dept. 'The servant looked familiar in a way that suggested Vasin had seen him before.' (Peter Newman, The Deathless, 2018) [AR]
• Dept of Anatomy. 'She had sprained muscles in her shoulders, thighs and ankles.' 'His legs finally got the message and they ran.' 'She glared into his armpit, appalled.' (Ibid) [AR]
• Literally Dept. '"It was returned by the bank," he said flatly. The voice swallowed that; literally as well as metaphorically.' (William Irish [Cornell Woolrich], Deadline At Dawn, 1944) [BA]
• Dept of Neat Tricks. 'Quinn dipped his tongue in, hauled it out again in a hurry. He quickly blocked the verbal opening that had been made by shoving his foot into it.' (Ibid) [BA] 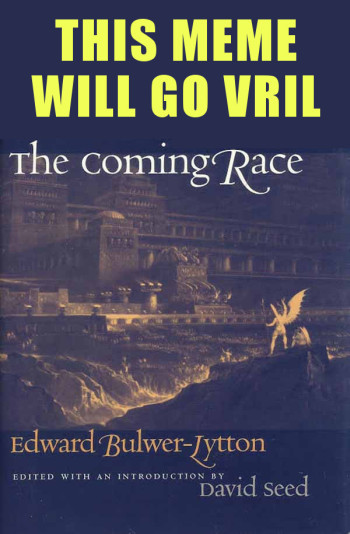 The Dead Past II. 20 Years Ago: 'Diana Wynne Jones sends a picture of chaps apparently mud-wrestling in their underpants, and with evil glee points out the caption: "The Langford Ha-Ha Game, a muddy version of five-a-side rugby played in the ha-ha. It was discontinued about ten years ago." I refuse to answer Diana's probing questions about what I was doing in 1988.' (Ansible 131, June 1998)

Magazine Scene. Peter Tennant, after ten and a half years, is putting an end to his 'Case Notes' book reviews section in Black Static. A new reviewing team will be formed: see the link below. (31 May)
http://ttapress.com/1979/time-to-say-goodbye/0/5/

Outraged Letters II. This cheered me no end, but I have no idea which Ansible-reading Steve sent it ...

Thog in the Fog. Small Betraying Detail Dept. '... And so since 10.18 this morning, Mr. President, I can confidently say that were a man on any island in Big River he would hardly know – so close would impenetrable fog walls be to him – whether he were on an island or on a prairie! Except, of course, for the angry purling of tons of dun-grey water flowing past him, each side.' (Harry Stephen Keeler, Cleopatra's Tears, 1940)