Margaret Atwood is to receive this year's €25,000 Peace Prize, not the Nobel but awarded by the German book trade. (Dw.com, 13 June)

Malcolm Edwards reports: 'We visited the new Henrietta Hotel this afternoon. The ground floor of no.14 Henrietta Street is transformed into a cocktail bar. We sat in the front window, where Gollancz's reception used to be (presided over by the ancient and formidable Margot). There's a short menu of 10 cocktails. Four are named for the general list: the Down and Out, the Lucky Jim, the Language, Truth and Logic and The Citadel. Four are named for the SF list: the Sirens of Titan, the Dune, the A Fall of Moondust and the Cat's Cradle. Two have no connection with Gollancz that I could discern: the Reaching the Port and the Ralph's Rigamarole [sic]. [...] There was a small display shelf of yellow jacketed Gollancz titles, and when we asked the waiter if he knew the history he told us that it was on the site of a famous London publisher. At this point I shyly produced my business card, which identifies me as Chairman of Gollancz. He was duly impressed, though not enough to discount our bill at all (curses!).' (10 June) A footnote: 'Might be worth mentioning that the cocktails are not priced to appeal to Orwell – between £10 and £15 each....' Gulp.

Herbert W. Franke was presented with a special Kurd Laßwitz Award for his lifetime achievement in German science fiction.

John Gilbert announced the demise of Fear on 7 June. 'There will be no further issues. Whilst my publisher organised the print side of the magazine I was left to produce the editorial but have so far received no recompense for the outgoings so far and this situation does not look as if it will change. Another £300 bill for the annual maintenance of the website and shop is due this month and I just cannot afford to pay out these sorts of sums any more.' The Fear website goes dark on 4 July.

J.K. Rowling became a Companion of Honour in the Queen's Birthday honours list. Others on this list who have genre links include Billy Connolly (The Hobbit: The Battle of the Five Armies etc), knighted; Julie Walters (Mrs Weasley in the Harry Potter films), a dame; and Raymond Briggs of Snowman and Fungus the Bogeyman fame, an OBE.

Zoran Živković was honoured as European Grand Master for life achievement in the ESFS Awards at Eurocon in Dortmund (see below).

Rumblings. 2019 Worldcon Site Selection opened at the Worldcon 75 site: www.worldcon.fi/wsfs/site-selection/. Dublin is unopposed. • Worldcon 2021: the Boston bid withdrew (no 'affordable, workable' venue found) and the 2024 Washington DC bid has as a result switched to 2021 – see dcin2021.org – leaving no current opposition to the planned UK in 2024 Worldcon bid whose website is at www.ukin2024.org.

As Others Ignore Us. Siddhartha Deb's article subtitled 'Why won't novelists reckon with climate change?' ponders this eternal mystery with two mentions of 'genre fiction' (but no examples) and none of sf. 'For [Amitav] Ghosh, this is in great part the result of literary fiction's need to keep the fluky and the exceptional out of its bounds, conceding the terrain of improbability – cyclones, tornadoes, tsunamis, and earthquakes – to genre fiction.' (thebaffler.com, 5 June) As Robert Conquest famously did not write: '"Lit-fic shuns climate change," they bellow till we're sick. / "But this book tackles it." – "Well then, it's not lit-fic."'

Court Circular. Progress in the Dr Seuss Enterprises lawsuit against the Seuss/Star Trek mash-up Oh, The Places You'll Boldly Go! by David Gerrold and Ty Templeton: the US court dismissed claims of trademark infringement by this 'highly transformative work that takes no more than necessary [from Seuss] to accomplish its transformative purpose and will not impinge on the original market for Plaintiff's underlying work'. The copyright claim continues, with DSE required to prove actual harm to their sales and licensing. (File 770, 13 June)

As Others See Us. Spy novelist Joseph Kanon is undogmatic about his dislikes. 'I read pretty much everything except science fiction. It's odd because I often enjoy sci-fi movies, mostly for the visual effects, but the books bore me. I think it's because they're not really interested in character, which for me is the essential element of all good fiction, but maybe it's just a blind spot. In fact, I concede the point now before complaining emails start arriving – my fault.' (NY Times, 15 June) [JBo]

Closure. Jack Rems announced that his Dark Carnival bookshop (Berkeley, CA) is to close after 41 years, the exact date depending on returns from the current clearance sale. (Berkeleyside.com, 12 June)

Random Fandom. BSFA AGM, June. Electing a new Chair wasn't on the agenda, but Gerard Earley of www.sciencefictionbookclub.org came armed with proxies for a coup against the current Chair, Donna Scott. The AGM compromised by appointing Earley as a BSFA director and webmaster of www.bsfa.co.uk, which thanks to his attentions has been down for several days. [Back again on 2 July.]
• Steve Stiles writes: 'Alas, I have a tumor in my right lung ... Surgery probably in July. According to the doctor who will do the operation, it doesn't look too bad and the "mass" (probably cancer) hasn't spread to the lymph nodes or anywhere else, so once it's out chemo probably won't be necessary and there's a good chance (65%) it won't be back. Fingers crossed.' Mine are crossed too.

The Dead Past. 50 Years Ago: 'New Worlds, the British sf magazine, has received an arts council grant of 1,800 pounds, about $5,040 in American funds. [Michael Moorcock comments:] "I am a little surprised we've got this grant. I didn't think it was that sort of magazine."' (SF Weekly 191, 17 July 1967)
• 20 Years Ago: 'Arthur C. Clarke is battling against natural modesty to tell the world about his Feb 97 fan letter from the Dalai Lama: "Your short story titled 'The Nine Billion Names of God' was particularly amusing."' (Ansible 120, July 1997)

Fanfundery. TAFF Trip Report Anthology: this long-planned ebook of unfinished reports since 1964, plus 'teaser' chapters from newer ones still in progress, is now a free download at taff.org.uk/ebooks.php.

Thog's Masterclass. Dept of Neat Tricks. 'I freeze my face and slide it against the back of my neck ...' (Charles Stross, Saturn's Children, 2008) [JDB]
• SM Dept. 'Ah, yes, milady! The hand ... when strongly leveled against the flech of the rump – the bare rump, that is – has long been known as a most satisfactory chastisement!' (Shannon Drake, Ondine, 1997)
• Can You Do This Indescribably? 'The dealer gave an indescribable, simultaneous shrug of his shoulders and his eyebrows.' (Clark Ashton Smith, 'Ubbo-Sathla', 1942) [BWF]
• Dept of Method Acting. 'His haggard face at first registered great perplexity; then it registered worry, thoughtfulness, or whatever other movements of consciousness that might cause his face to look as it did.' (Jean-Patrick Manchette, The Prone Gunman, 1981; trans James Brook 2002) [PB]

Editorial. The threatened ebook of Chris Morgan's and my Facts & Fallacies: A Book of Definitive Mistakes and Misguided Predictions (first published 1981) exists in draft form and has been admired by a small audience of Chris Morgan and David Langford, but keeps being delayed by obsessive tinkering. August, maybe.
• Although Lord Buckethead the 'intergalactic space lord' got most media attention, there were other candidates in the UK General Election who were not of this world. Here in Reading East the most interesting campaign flyer was from the subtly acronymmed Movement for Active Democracy, as below. Shades of Illuminatus!, or the Astral Leauge ... 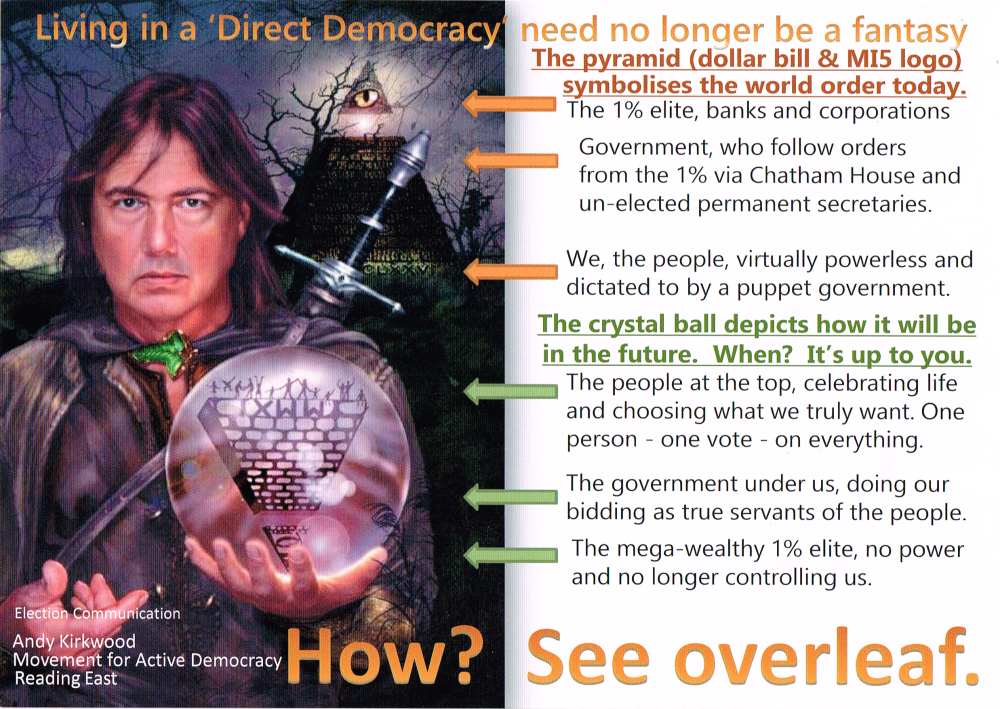 Outraged Letters. Ian Covell on Adam Roberts in A359: 'I rather liked the disputatious Walter Harris, and wish he'd managed to publish some more of the books that were scheduled. / Anyway, I don't think Thog would have much meat from the quotes, some of which were spot-on. I suggest finding the (to me) incredible The Day I Died, which is beautifully written, charming, and healthily sexy.'

Thog's Second Helping. Expressive Eyes Dept. '... Her eyes were huge, purple, limpid. They were round and sober with the innocence of a child's; they were inscrutable with ageless wisdom; they were dark wells of agony, ancient and ageless ... I knew she was nothing human. Yet my fancy made her ever so, for her eyes and lips and even the impudent flirt of her crimson plume held all the essence of humanity: wisdom and the vain yearning to forget, pride and bitter defeat, bright courage and consuming fear, living joy and ultimate, infinite agony.' (Jack Williamson, 'Dreadful Sleep', 1938 Weird Tales) [BA]