It's a Con! Another Langford ebook from Ansible Editions: Don't Try This At Home: Selected Convention Reports, an occasionally esoteric compilation ranging from Mancon 5 in 1976 to Loncon 3 in 2014. £1 goes to TAFF for each copy sold. See ae.ansible.uk/?t=donttrythis.

George Lucas is one of those receiving 2015 lifetime honours from the John F. Kennedy Center for Performing Arts. The ceremony, hosted by some chap called Obama, will be in December. (BBC, 15 July) [MPJ]

George R.R. Martin, as homage to his characters' gory deaths in Game of Thrones, makes a cameo appearance in an already much circulated clip from the aptly titled Sharknado 3: Oh Hell No! 'as a moviegoer who gets brutally attacked by a shark that somehow jumps out of the movie screen and into his face.' (Cnet.com, 23 July)

Michael Moorcock's profile/interview (New Statesman, 24 July) had a subhead saying he 'revolutionised science fiction with symbolism, sex and psychoactive drugs. Now, at 75, he has invented another genre.' Also included was the mandatory MM quotation 'I think Tolkien was a crypto-fascist'. Mike has since issued a disclaimer: 'He was a nice bloke and it's a generous, well-meant, piece but I'm afraid I read it saying "no I didn't" and "I never said that" so many times that it was a relief to get to the last, more accurate, para. My fault, maybe, for talking too fast and modifying too frequently. I've never claimed the authority of being working class! I'm from the class most artists come from, the hated petite bourgeoisie, though I had a variety of relatives who didn't. I have spent half my life saying that Jerry Cornelius is not a "secret agent". Feel like I've just taken a turn on the same old roundabout. But I'll do a lot for four good pork pies. / Oh, and I absolutely LOVE hobbits. I'm just looking for the best recipe.' (www.multiverse.org, 24 July) [JL]

F.W. Murnau, director of the classic vampire film Nosferatu (1922), was in the news again in July with reports that his skull was stolen from his grave in Stahnsdorf cemetery near Berlin. (BBC, 15 July) [MPJ] If this were a Tim Powers novel there would be excellent magical reasons for this theft, and others too would lose random body parts.

Charles Platt and his long-time partner Erico Narita were married on 2 July in Arizona: 'please, no wedding presents.'

Amy Schumer, US comedian, annoyed the galactic overlords of Star Wars by appearing dressed as Princess Leia in a naughty GQ magazine photo feature: in bed with ardent robots C-3PO and R2-D2, in a high-kicking chorus line with Imperial Stormtroopers, and so on. 'Lucasfilm & Disney didn't approve, participate in or condone the inappropriate use of our characters in this manner,' thundered the official Star Wars Twitter feed. (BBC, 17 July) [MPJ]

Benjanun Sriduangkaew, Thai author identified in 2014 as the former abusive blogger Requires Hate or Winterfox, has been further outed by a stalker who posted details of her 'true identity and her extremely privileged extended family'. All online, but let's not link to it.

J.R.R. Tolkien is now commemorated on maps of Saturn's moon Titan, where by IAU convention the mountains are named for those of Middle-earth and the hills for its characters: hence Mountains of Moria (Moria Montes) and Gandalf Hills (Gandalf Colles). [BH] Freta, straits or channels, get the names of characters in Asimov's Foundation series. The IAU has yet to approve the New Horizons team's name Cthulhu for a dark region on Pluto, where underworld connotations predominate – though 'Writers associated with Pluto' could give a chance to Disney.

Rumblings. Worldcon 2015: Sasquan had over 10,000 members as of 15 July. Nearly 3,000 Hugo ballots were cast by 24 July. Worldcon 2017: mailed/emailed site selection ballots (Helsinki, Nippon, Montreal or Washington DC) must be received by 24:00 PDT on 10 August. See sasquan.org. Worldcon 2022: a bid for Doha, Qatar – challenging the Chicago bid – has appeared at worldcon.org/bids. No further details.

As We See Us. Stephen Baxter explains Wellsian sf in a Guardian interview: 'So it's like therapy, you're telling a story because you're frightened of the future.' (25 July)

Career Advice to fugitives from US justice: don't star in even a low-budget horror film under your own name, as did bank robber Jason Stange in Marla Mae (forthcoming 2016). Police relentlessly noticed him in advance-publicity photos, and pounced. (BBC, 29 July) [MPJ]

The Weakest But Very Topical Link. Richard Osman: 'What is the title of the third book in the Hunger Games trilogy?' Contestant: 'To Kill a Mockingbird.' (BBC2, Two Tribes) [PE]

Court Circular. The iron jackboot of Disney came down hard on the British 'Joker's Masquerade' fancy-dress retailer, which had long used starwars.co.uk and related domains for relevant themed costumes. Disney duly complained to Nominet, which ruled in its favour – 'Star Wars cannot sensibly refer to anyone else other than the complainant' – and described the registration as 'abusive'. (BBC, 9 July) [MPJ]

As Others See Us. Joshua Rothman tackles the genre rather as Julius Caesar dealt with Gaul: 'Sci-fi stories divide roughly into three categories. First, there are stories about regular people who just happen to live in the future, like "Star Trek" and "Star Wars." Second, there are transhumanist stories, such as "Dune" and "Sense8," in which human nature is somehow altered. And third, there are robot stories, in which human nature is, for the most part, fixed, the better to be inherited by our technological replacements – the Cylons in "Battlestar Galactica," say, or Ava, the robot in Alex Garland's recent film, "Ex Machina."' (The New Yorker, 14 July) [SM] That should help us pare down the interminable list of SF Encyclopedia theme entries to, say, three.

Magazine Scene. A new Edinburgh-based sf magazine, Shoreline of Infinity, launched on 2 July with its Summer 2015 issue (both print and digital). Read all about it at www.shorelineofinfinity.com.

I Say It's Spinach. 'Popeye is very, very similar to these medieval sculptures. You have a sense of transcendence taking place here. Here with Popeye it's transcendence of male energy. He eats that spinach and he transcends into the strength. And I think, you know, that's the art; the spinach is art.' (Jeff Koons in Imagine ... Jeff Koons: Diary of a Seducer, BBC1, as featured in Private Eye's 'Pseud's Corner', 24 July)

Random Fandom. 'Bill Burns is currently indisposed. There will be no updates until further notice.' Thus Bill's efanzines.com (host site to innumerable fanzines) in late July; he's recovering well from a bug picked up while in hospital for a routine minor op.
• Gary Farber is also not having fun: 'I crushed my foot, fracturing the calcaneus bone into at least five fragments, which will be requiring surgery.'
• James Nicoll posted 'my 109th review of a book by a woman this year, which means I can now say I have reviewed more books by women in 2015 than Tor.com, Romantic Times (spec fic only), SFX, Strange Horizons, Interzone, io9, F&SF, Vector, Analog, Asimov's, NYRSF, Science Fiction Studies, Foundation, CSZ, and LARB did in 2014. / On track to exceed Locus' numbers in this matter on or around the 7th of August.' (29 July)

The Dead Past. 60 Years Ago, a touch of politics in UK fandom: 'European May '55 featured a 11 page article on s-f by one Gerald Hooley; an enthusiast's article one would never expect to see published in a prozine, mentioning over a 100 Astounding stories (man's an enthusiast) and others, plus a fairly well-balanced survey. Only drawback is, European is the leading Fascist organ in this country. Do we want to know Hooley or not?' (Science Fantasy News 13, August 1955)
• 50 Years Ago, the second London Worldcon was imminent with Brian Aldiss as guest of honour: 'The largest ever conclave of sf writers, editors, readers and fans will gather this weekend, 27th-30th August, at the Mount Royal Hotel, Marble Arch, London. Come along and join the fun. Better early than late. Many conventioneers are already in attendance, expectant with baited breath!' (Skyrack 82, August 1965)

Thog's Masterclass. Pluto Revealed! 'Originally it revolved around another sun, some star which was light-years away. How it tore loose from that star we'll probably never know – the star might have simply become too dim, their planet might have been on a shaky orbit, an experiment of theirs might have jarred it loose, many things could have happened.' (Donald A. Wollheim, The Secret of the Ninth Planet, 1959) [JN]
• Neat Tricks. '"Why, yes, Simon," she said, looking up at him through her eyelashes.' (Susan Elia MacNeal, Mr. Churchill's Secretary, 2012) [PB]
• Dept of Rocks and Hard Places. 'We are between the wild thoat of certainty and the mad zitidar of fact – we can escape neither.' (Edgar Rice Burroughs, The Gods of Mars, 1918)
• Mot Juste Dept. 'Rugolo glanced at the greenness carpeting the plain, which he had taken to be a variety of grass or moss, forms of verbiage common on many worlds ...' (Barrington J. Bayley, Eye of Terror, 1999) [BA]
• Dept of Baleful Dessert. '... a face pink and stern as frozen strawberry custard.' (Ayn Rand, Ideal, written 1934; published 2015) [PB]

R.I.P. Supplement. Toby English, British book dealer who used to sell sf/fantasy in UK convention dealers' rooms, died from cancer on 25 July. His shop in Wallingford had closed earlier in 2015. [BA] • Adrienne Martine-Barnes (1942-2015), US author and costume fan who began publishing fiction in 1982 and produced both solo novels and multiple collaborations with Marion Zimmer Bradley and Diana L. Paxson, died on 20 July; she was 73. [SFS/Steven H Silver]

The Dead Past II. 30 Years Ago, the screen flashed Game Over: 'Imagine magazine bit the dust in August, the issue on the stands being appropriately numbered 30. This is all TSR's fault: "Der Fuhrer Amerikanisch has ordered the final solution," wailed erstwhile editor Paul Cockburn. "You lucky sod, Langford, you're the only contributor to issue 31 who's being paid," report envious (and premature) games fans. Within hours of the sinking, ace film reviewer Colin Greenland was scuttling aboard the rival ship White Dwarf (where his column resumes in January)....' (Ansible 44, September 1985)

Free Ebooks of fannish interest remain available at the TAFF site, with no more strings attached than a gentle suggestion that if you enjoy them a donation to TAFF would be welcome:
http://taff.org.uk/ebooks.php

Are You Going to the WSFS Business Meeting? It would be ever so helpful if you could let them know:
http://kevin-standlee.livejournal.com/1480479.html

Ramsey Campbell Cosplay Horror! Presumably because his formal Cthulhu outfit had been damaged by blasphemous ichor, Ramsey was reduced to academic robes on the occasion of his Honorary Fellowship from Liverpool John Moores University for 'outstanding contribution to literature'. Congratulations.... 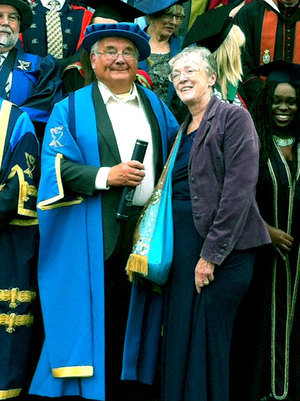 Thog's Second Helping. The Lumpy Eyes Have It. 'Maybe it was his eyes, like two unpolished stones.' (Paul Halter, The Invisible Circle, 1996; trans John Pugmire 2014)