Ebookery Continued. The traditional Langford backlist release for May was my hefty retrospective collection Different Kinds of Darkness, with six stories added since the 2004 print edition. Click without thinking: ae.ansible.uk/?t=dkod. To vary the relentless hard sell I've also prepared some free ebooks for download at taff.org.uk/ebooks.php. These include four past TAFF trip reports – one of them my own – a couple of old fan classics, and Rob Hansen's massive THEN: A History of UK Fandom 1930-1980 (with supplements taking the story to 1987).

Margaret Atwood is the first of 100 contributors to 'Future Library' (created by artist Katie Paterson), which will collect one unpublished MS a year and print them all in 2114 to coincide with The Last Dangerous Visions. Until then, fandom will be on tenterhooks as to whether the Atwood story contains talking squid in outer space. (BBC, 26 May)

Simon Pegg expressed cautious second thoughts about current superhero film blockbusters: 'Obviously I'm very much a self-confessed fan of science-fiction and genre cinema. But part of me looks at society as it is now and thinks we've been infantilised by our own taste. We're essentially all consuming very childish things – comic books, superheroes. Adults are watching this stuff, and taking it seriously! / It is a kind of dumbing down because it's taking our focus away from real-world issues. Films used to be about challenging, emotional journeys. Now we're really not thinking about anything, other than the fact that the Hulk just had a fight with a robot.' (Independent, 18 May) [MPJ]

Cat Rambo has been elected as the latest President of SFWA.

John Scalzi's $3.4 million deal with Tor, for 13 books to be written over ten years (Washington Post, 28 May), caused much comment online. Various puppy-aligned pundits – see A334 – indicated that this was a terrible calamity, signalling the imminent End Times for both author and publisher; Vox Day deplored Scalzi's failure to take the wiser course of self-publishing. Others, incredible though it may seem, disagreed.

4 Jun • London First Thursday pub meeting upstairs at The Castle, 34-35 Cowcross St, London, EC1M 6DB, from 6pm. Temporary move during Melton Mowbray refurbishment: back to that pub in July. Its name is being refurbished too, changing to the Inn of Court. [RR]

Rumblings. 2015 Hugo Voting continues at sasquan.org/hugo-awards/voting/ until 31 July. Your Sasquan membership number and PIN are required to vote online; likewise to get the Hugo Voter Packet of nominated works at sasquan.org/hugo-awards/packet_download/. Coverage is incomplete, largely owing to publishers' preferences: for example, Best Novel has the whole of The Dark Between the Stars, The Goblin Emperor and The Three-Body Problem (all in Epub, Mobi and PDF format), but PDF extracts only from Ancillary Sword and Skin Game.

As Others See Us. The New Statesman's Rachel Cooke was swift to spot the damning flaw in the BBC's Jonathan Strange & Mr Norrell: the acting may be fine but it's 'aimed, it seems to me, at a generation brought up on Harry Potter and still feebly in mourning for it. I mean, there are CGI talking statues, for heaven's sake.' (21 May) Christopher Stevens at the Daily Mail was horrified that it 'is not Poldark. / There were no damsels with heaving bosoms, for a start. In fact, almost the only female under the age of 40 was lying on a couch, coughing herself to death with consumption.' Which leads with inexorable geometric logic to: '... this mishmash of folklore and historical fantasy is revealed for what it really is – a J. K. Rowling rip-off.' (18 May) Oh dearie me: Susanna Clarke began writing her novel several years Before Potter.

Science Corner. Mere speculation, but just suppose: 'The only method of transmutation known to modern science is by radiation bombardment. The high-energy particles required are deadly to an unshielded operator. Only by the wildest stretch of imagination is it possible to suspect that some ancient alchemist found a natural radioactive energy source by accident, that he used it for transmutation and that he passed the secret to the Cathars (great healers who might have attended the dying alchemist) ...' (Lionel and Patricia Fanthorpe, The Holy Grail Revealed: The Real Secret of Rennes-le-Château, 1982) [BA]

The Weakest Link. 'This author described a Utopian republic in his 1966 novel The Moon is a Harsh Mistress.' Contestant: 'Who is H.P. Lovecraft?' (Jeopardy, 7 May) [BF/AIP]
• Dale Winton: 'Who created the characters Tweedledum and Tweedledee? Was it J.R.R. Tolkien, Lewis Carroll or Dr Seuss?' Contestant: 'Well it's not Lewis Carroll. He wrote The Lion, The Witch And The Wardrobe.' (BBC1, In It to Win It) [PE]

Court Circular. Sherlock Holmes may be mostly in the public domain, but the Doyle estate is suing Miramax over its coming film Mr Holmes. This shows Holmes in later life, as in some late stories where copyright is still a live issue. (Hollywood Reporter, 22 May) [DKMK] Thus marginal matters, like Holmes living in a lonely Sussex Downs farmhouse in sight of chalk cliffs, are sternly invoked as 'protected elements'.

Outraged Letters. Rog Peyton: 'So the news about K.J. Parker being Tom Holt is finally out. When Tom did a signing at Andromeda shortly after the second Parker book he let me into his secret but made me swear not to reveal it. He signed all the stock we had of the Parker books (as K.J. Parker) and when I listed them in the catalogue I stated that she had popped into the shop as she had relatives in Birmingham. I think I even said I'd learned that the K stood for Katherine. Yes, 'twas I who started the "female" story – I can now own up to my little fib. Sorry folks.'
• Triffid Alley. One comment on the unveiling of this London plaque (see A333): '... to be complete, they should have incorporated a blurb in braille.' ('Lord Blood', Twitter, 26 May) [BB]
• Lisa Tuttle felt this legend should read DANGER: HEAVY PLANT CROSSING. 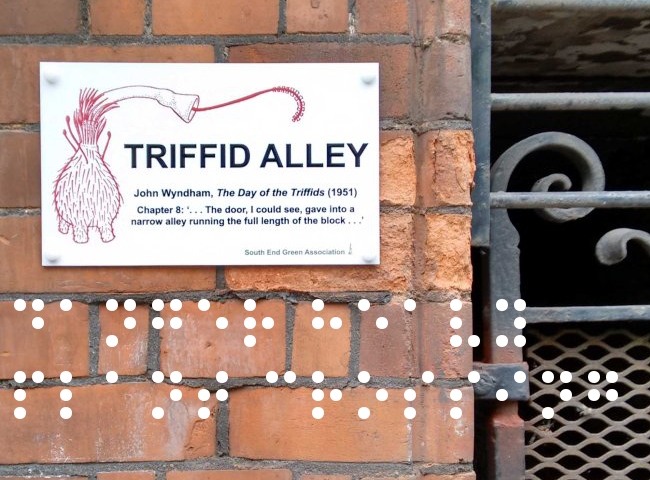 In Typo Veritas. A Guardian article explained a right-wing US blog title as homage to the revered Ayn Rand: 'Atlas Shurgs.' (4 May) [MM]

Random Fandom. File 770 has proudly adopted a new motto on its website masthead: '"... the 770 blog, that wretched hive of scum and villainy ..." – John C. Wright.' Another satisfied customer! Mike Glyer is still running daily roundups of commentary on current Hugo ructions at file770.com; rather him than me.
• Making Light (Public Enemy #2 in the Sad/Rabid Puppy pantheon, after John Scalzi at #1) hosted much constructive discussion of how the Hugo nominations process can be made more resistant to slate voting – regardless of any slate's politics – and came up with what has been nicknamed 'E Pluribus Hugo'. This, a truly remarkable system which this Ansible is too small to contain, will be proposed at the Sasquan WSFS Business Meeting. Read all about it at nielsenhayden.com/makinglight/archives/016262.html.

The Dead Past. 70 Years Ago, a familiar exhortation from a forerunner of the BSFA: 'Whatever fan activity you wish to indulge in the BFS will give you every aid in its power, but if you do not wish to do anything then we cannot help you.' (British Fantasy Society Bulletin 22, June 1945)
• 50 Years Ago, an appeal to a familiar market segment: 'TAFF delegate Terry Carr is editing Doubleday's Science Fiction for People who Hate Science Fiction.' (Skyrack 80, June 1965)
• 30 Years Ago, a note on editorial policy: '"A Zine is classed as a terror weapon. It rends and distorts, twisting the structure of the target completely out of shape." (Philip E. High: Come, Hunt An Earthman).' (Ansible 43, May/June 1985)
• 20 Years Ago: 'The 8th Earl of Clancarty, famous for UFO books under the byline Brinsley Le Poer Trench (his actual name, minus an initial "William Francis"), died in May aged 83. Perhaps his finest hour was the 1979 House of Lords UFO debate, whose transcript in Hansard sold out on the following day....' (Ansible 95, June 1995)

What I Missed. Ursula K. Le Guin posted a follow-up to her A333-cited Bookviewcafe.com reproof of Kazuo Ishiguro, apologizing for 'my evidently over-hasty response' (10 March). 'Many sites on the Internet were quick to pick up my blog post, describing it as an "attack", a "slam", etc. They were hot on the scent for blood, hoping for a feud. I wonder how many will pick up this one?' Oops. Well, eventually....

Thog's Masterclass. Out-of-Context Entendre. 'Dinah didn't mention the other reason, which was that the biggest part of Sean's package was so screamingly radioactive that it couldn't be allowed anywhere near Izzy.' (Neal Stephenson, Seveneves, 2015) [JC]
• Dept of X-Ray Vision. 'Not for the first time, a cold fist appeared deep within her stomach.' (Becky Chambers, The Long Way to a Small, Angry Planet, 2014)
• Tone of Voice Dept. '"Just for one, Miss?" the waitress asked in a long black-skirted uniform.' (Fiona McIntosh, The Last Dance, 2015) [YR]
• Neat Tricks. '... having spent a sleepless night, filled with uncomfortable dreams ...' (Priscilla Masters, Slipknot, 2007) [PB]
• Dept of Synaesthesia. 'I heard Learner then, a noise so soft and invisible it wouldn't mean anything unless you knew what it was.' (John Burnham Schwartz, Reservation Road, 1998) [PB]
• Feminist Sympathy Dept. 'Connie had a wry, compact intelligence, a firm little clitoris of discernment and sensitivity ...' (Jonathan Franzen, Freedom, 2010) [J]
• Dept of Extreme Etiquette. 'But one does not scream with a beer barrel tap inserted deep into one's jugular vein ...' (Jack Oleck, The Vault of Horror, 1973) [BA]

Origin Story. David Given shares his researches into a Doctor Who spinoff novel in which aliens are stranded on our planet: '"We appeared halfway between Earth and Mars, and limped as close to Earth as we dared." He was tapping keys, bringing up the inventory program. "Then we sent the ship on a course for the sun and crammed ourselves into an escape pod." / "Where did you land?" / "In the Welsh countryside. We were lucky to come down over land. Hogan got married nine years ago. He's living in Upper Norwood. Beilby died of the common cold. And no one knows what happened to Langford."' (Kate Orman, Return of the Living Dad, 1996)

Late-Breaking. Gemmell Awards (heroic fantasy) novel shortlist: Half a King by Joe Abercrombie; Valour by John Gwynne; Prince of Fools by Mark Lawrence; Words of Radiance by Brandon Sanderson; The Broken Eye by Brent Weeks. For the other categories, see www.gemmellawards.com.

The Dead Past II. 30 Years Ago (very nearly), the voice of prophecy was heard in a TransAtlantic Fan Fund newsletter: 'What we meant was that TAFF is an institution created for a specific purpose, with its own agenda – promoting greater transatlantic amity between fans – and should not be used as a mechanism for pursuing unrelated issues; no more than, say, the Hugos should be used as an exercise in block-voting by a group with an ideological axe to grind, rather than in recognition of the single outstanding work nominated.' (Patrick and Teresa Nielsen Hayden, TAFFluvia 2, August 1985)