Advertorial. This is a traditional time of year to wish you all a merry Christmas or seasonal festivity of your choice, and try with ill-concealed desperation to sell you things. The very small press Ansible Editions has emerged from its long coma with Benchmarks Continued: F&SF 'Books' Columns 1975-1982 by Algis Budrys, collecting the first third of his long run of F&SF criticism as a trade paperback (with the blessing of his widow Edna Budrys). Read all about it at http://ae.ansible.co.uk. [Stop Press: 20% Xmas discount until 14 December!]

The World in Winter

Michael Chabon apparently writes fast. 'It's true that Chabon is often fond of taking his sentences out for a lively swerving spin, letting the words purr as he shifts into higher verbal gears while simultaneously steering us toward precise pop-culture references until the whole high-flying passage feels like the Ferrari joy ride in Ferris Bueller's Day Off.' (Michael Cavna, Washington Post, 14 October) [MMW]

C.S. Lewis is to be honoured with a memorial stone in Poet's Corner, Westminster Abbey, on 22 November 2013 – the fiftieth anniversary of his death. (BBC News, 22 November) [MPJ]

Camille Paglia's enthusiasm for sf sublimities earned her a Private Eye 'Pseuds Corner' appearance in November: '... it is emotionally overwhelming, with the intensity and sweep of a Puccini opera. The long finale of Revenge of the Sith, leading up to Darth Vader's tortured fabrication and the birth and separation of the twin babies Luke and Leia, is in my view the most powerful work of art in any genre in the past 30 years – including literature.' (Huffington Post interview, 11 July)

Terry Pratchett 'nearly died' in a New York cab during his November US publicity tour. When his heart went into fibrillation, his assistant Rob Wilkins 'had to kneel on the back seat of the taxi and give him CPR. It was fingers down throat stuff.' After a rapid recovery, Terry remarked that he'd heard book-signing tours could kill you 'quicker than drugs, booze and fast women'. (Telegraph, 28 November) [MPJ] He also announced that he will pass the Discworld novel franchise to Rhianna Pratchett when he's no longer able to write: 'The Discworld is safe in my daughter's hands.' (Interview, New Statesman, 14 November)

Louise Robinson, president of the Girls' School Association, is not alone in attacking education secretary Michael Gove's retro plans for UK schools, but opens her argument with a slightly unexpected revelation: 'The Star Trek society is already here. We need to look at the way the world of the future is going.' (Independent, 12 November) [MPJ]

Mary and Bryan Talbot are on the Costa Book Awards biography shortlist with their graphic novel Dotter of Her Father's Eyes, centred on James Joyce's daughter Lucia. (Mail, 21 November) Bryan, sadly: 'Shame it's not SF so you could mention Dotter in Ansible.' Indeed this is a pity. It goes without saying that 'Most papers are leading with the "Shock horror! – Comics on Costa Shortlist" angle....'

Rumblings. As usual, there's no London BSFA meeting in December. • LonCon 3 (the 2014 London Worldcon) sent a PR update about the Hugo rule change that allows members to nominate in the previous Worldcon's Hugos as well as the current and next: 'This means that all members of Loncon 3 (other than children or infants) will be able to nominate for the 2013, 2014, and 2015 Hugo Awards.'

As Others See Us. A little love in the Firefly reunion tv special: 'And for the fans – the greatest moment is this brief snippet where Gina Torres says, "There's nothing like a scifi fan. Like warm honey, poured all over you." I want to watch that clip over and over.' (io9, 12 November) [JCo] I suppose it rather depends on which fan gets poured.

We Are Everywhere. Jon Stewart on the intimate emails between a US general and a married woman: '30,000 pages of emails – I could understand it if Stephen King and George R.R. Martin were having an affair!' (The Daily Show with Jon Stewart, 15 November) [MPJ]

As Others See Us II. A teachers' magazine delivers a solemn warning: 'Stress reality, not science fiction. Encourage kids to look at what's needed in the real world, then come up with inventions to meet those needs. If kids get their inspiration from science fiction books or movies, they're avoiding one of the prime criteria for inventing: Will it work?' (Terry Borton, Learning86, October 1986) [PL] 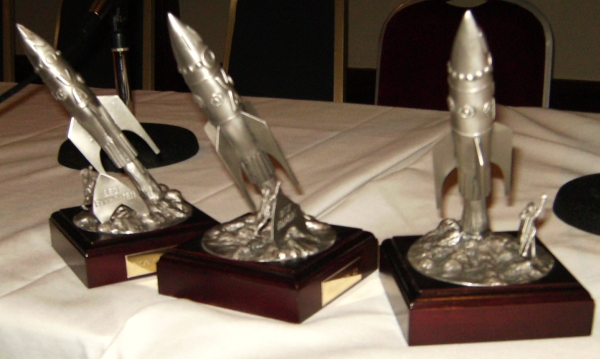 Publishers & Sinners. Fictionwise.com, the early e-publishing venture that was pretty good until bought up by Barnes & Noble, is closing on 4 December. Customers will be allowed to 'migrate' ebook purchases to the B&N Nook platform. After so many years I'll miss all those Fictionwise royalty checks for exciting sums like $1.84.

As We See Others Seeing Us. 'We all "know" what the stereotypical gamer looks like. He is a white male between the ages of fourteen and forty-five, either comically skinny or egregiously fat, an inveterate mouth-breather with bad skin who never leaves his parents' basement, where he lives, and is constantly geeking out, if not to Dungeons and Dragons, then to Halo or to World of Warcraft. He's forgotten more about Captain Kirk than we will ever know, and when he's not doing 2d6 damage to an orc while eating Cheetos or drinking Mountain Dew, he's dreaming that one day a real live woman will talk to him.' (Lizzie Stark, Leaving Mundania: Inside the Transformative World of Live Action Role-playing Games, 2012) [MMW]

Magazine Scene. Analog and Asimov's announced higher short- fiction payment rates on 29 November, effective immediately. The rise is from 6-8 cents per word to 7-9 cents per word.

The Dead Past. 50 Years Ago, a British national institution maintained or exceeded its normal level of hilarity: '"Robert A. Henlein is the author of The Day After Tomorrow (Mayflower Books). In our September 19 issue he got misprinted as Hieline." (Item in Punch, issue of 3rd October 1962. Absolutely no comment about what some magazines will do to raise a laugh).' (Skyrack 48, December 1962)
• 20 Years Ago, others continued to make important literary distinctions: 'J.G. Ballard, 62 on 15 Nov, got a Sunday Times birthday notice as "science fiction writer and novelist". What, both?' (Ansible 65, December 1992)

Precocious Engrams. Pianist Daniel Barenboim is interviewed by Rosanna Greenstreet: Q. 'What is your earliest memory?' A. 'In my mother's belly, I remember not liking the tempi my father played the Beethoven Sonatas in.' (Guardian, 2 November) [PE]

Fanfundery. TAFF 2013: nominations are open for the westbound race to LoneStarCon 3, the Texas Worldcon. Candidates need to find three nominators, provide a platform and post £15 'bond': further details at taff.org.uk. Nominations close 31 December 2012, and voting will continue until 5 April, allowing final campaigning at Eastercon.
• BIFF, the British & Irish Fan Fund intended to help hard-up fans attend conventions on the far side of the impassable Irish Sea, is still at the planning stage. More to follow from James Shields (whose brainchild this is), ably assisted by Claire Brialey as pro-tem English administrator.

SF Encyclopedia Update. After passing the 3.8 million word mark in early November, we hardly hoped to reach 3.9m by 1 December but did manage 3.85m. As a bonus, the 1997 Clute/Grant Encyclopedia of Fantasy (1.2 million words) is also now online in the same format as the SFE, though it hasn't been updated. All free at sf-encyclopedia.com (main site) and sf-encyclopedia.co.uk (various editorial extras).

Random Fandom. Fancyclopedia 3 (fancyclopedia.wikidot.com) has interesting category tags: 'List of pages tagged with abomination: Claude Degler / Richard Shaver / Scientology / Sci-Fi / Speculative Fiction / WSFS, Inc.' [MM]
• The BSFA's Vector remains in the toils: 'There are still Vectors forthcoming! When, I am not currently certain, as our third layout volunteer has succumbed to a bad case of Life, with the current issue mostly done.' (Torque Control, 20 November)

Thog's Masterclass. True Romance Dept. 'Like the red oak tree, she could not remember a time when she hadn't loved dark-haired, handsome, surly Adam Freneau.' 'The sturdy frame of his muscular young body, presaging the manhood that was to come, had engraved itself on her heart.' 'She had only to say his name to herself or see his face in her fancies and the blood in her body would stir warmly.' 'Cherry felt her heart stop beating, the lungs in her bosom squeeze unbearably.' (all Edwina Noone [Michael Avallone], The Second Secret, 1966) [FMN via DL]
• Dept of Trickle-Down. 'There, in his poky office, Simon Price gazed covetously on a vacancy among the ranks of insiders to a place where cash was now trickling down onto an empty chair with no lap waiting to catch it.' (J.K. Rowling, The Casual Vacancy, 2012) [MMW]
• Spung in a Cold Climate Dept. 'His nipples were standing so erect they looked like little pink pencil erasers.' 'I looked down and noticed my own chest made it look like I was trying to smuggle candy corn out of the country, two at a time.' (Nancy A. Collins, Right Hand Magic, 2010) [CH]
• Dept of Pet Names. 'When he got there, his Deputy, a portly bald man with a ginger moustache called Bo Sampson, was trying to calm down a hysterical man.' (Adam Millard, Dead West, 2011) [MJS]

Outraged Letters. Steve Jeffery sent a graphic analysis of the 'As Others See Us' tradition ... 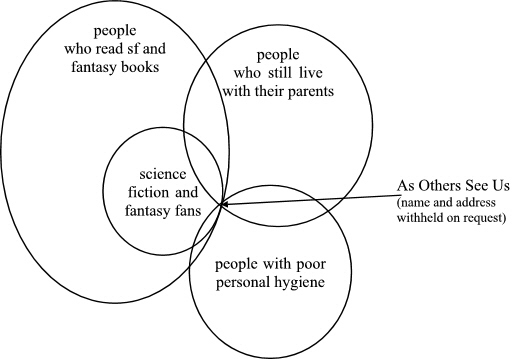 Thog's Second Helping. Scroll down for an appreciation of the legendary Michael Avallone, from which Thog's above True Romance quotations were ruthlessly nicked:
http://mysteryfile.com/blog/?p=20048