The Rituals of Infinity

The Inklings Group’s plan to save the Lamb and Flag in Oxford – one of the original Inklings’ regular pubs, closed by coronavirus in 2021 (see Ansible 412) – has succeeded. It reopened on 7 October. (BBC, October)

Brian Stableford dismayed me with a news release: ‘Following an illness Brian Stableford spent two months in hospital with kidney failure. Since release is unable to read, write or walk (or type). Not yet dead but might as well be. RIP.’ (Email, 19 October) A later and more cheery message notes that he has very good carers. Hoping for better news....

Borys Sydiuk of Kyiv expressed his dismay that ‘Wordcon-2023’s GoH Sergei Lukianenko celebrates the Russian missile attack on Ukraine and hails the murder of Ukrainian civilians. / The Russian young-adult SF author Sergei Lukianenko says in his post that all Ukrainians are fascists and should be murdered. After the mass attack of Russian terrorists on Ukrainian cities and civilian infrastructure on October 10, he made a post hailing the destruction of power plants, heat suppliers, and other civilian infrastructure: “Finally, I wish it would be so in February, deliberately and ruthlessly, fascist scum should go to hell,” meaning all Ukrainians.’ (Facebook, 12 October) Even Western members of the Chengdu Worldcon committee prefer not to comment on their guest’s fulminations. Of the remaining guests, Liu Cixin of China has publicly supported Chinese mass internment of Muslim Uighurs in Xinjiang while Canada’s Robert Sawyer seems blithely unconcerned about sharing a platform with the other two.

Cecilia Tan was sceptical about email from ‘E C Publishing LLC’ offering to ‘introduce your book to literary agents, booksellers, and major traditional publishing companies’ (false assumptions being that Tan has no agent and is self-published), and announced this scepticism on Twitter. A mere eight months later came a stroppy text message, from the EC Legal Team: ‘You have between 24 and 48 hours to delete your post; otherwise legal action will be taken.’ Tan’s query ‘Is it normal for a “legal team” to threaten via text?’ was met with a chorus of negatives (Twitter, 28 October). Writer Beware looked at EC in a post on ‘Junk Book Marketing’ (April 2022). For $499 they’ll put two books on a shelf: exposure!

Rumblings. London First Thursdays. The Bishop’s Finger pub is now booked to the end of 2023; the extra Christmas 2022 meeting is on 15 December. [RR]
• The 32nd UK Filk Con, planned for February 2023, will not be held: hotel lost and no replacement found, while costs seem likely to become prohibitive.
• Octocon 2023 is taking memberships – adults €60 – at octocon.com; dates and venue (presumably Dublin) are awaited.

As Others Cite Harry Potter. ‘Being Tory Leader is like being Defence Against the Dark Arts teacher: every idiot fancies a go, nobody lasts long, and there’s a good chance you’ll bump into Voldemort’s soul.’ (Russ Jones, Twitter, 20 October)

The Clarke Award’s Twitter feed enjoyed a power gloat next day: ‘How it started: Yesterday Deep Wheel Orcadia was somewhere like 281,000 in Amazon book rankings. / How it's going: Right now it’s in the Top 500 and crushing it in the poetry bestsellers!’ (27 October)

Publishers and Sinners. Penguin Random House’s merger with Simon & Schuster has been blocked by a US federal court as likely ‘substantially to lessen competition’. (Publishers Weekly, 31 October) [AIP]

As Others See Us. ‘Stories of the supernatural have been supplanted by “science fiction.” Though the talent of H.G. Wells did in that genre nearly everything worth undertaking, a flood of “scientific” and “futuristic” fantasies continues to deluge America. With few exceptions, these writings are banal and meaningless.’ (Russell Kirk, ‘A Cautionary Note on the Ghostly Tale’ in The Surly Sullen Bell, 1962) [LP]

The Weakest Link. Q: ‘Which children’s author was named after the explorer Roald Amundsen?’ A: ‘Enid Blyton.’ (ITV, The Chase)
• Q: ‘In the films Frankenstein and Bride of Frankenstein, which Boris played Frankenstein’s monster?’ A: ‘Boris Johnson.’ (BBC1, The Tournament) [PE]

Random Fandom. Corflu 39 Awards: Geri Sullivan for life achievement and Claire Brialey as past president of fwa (now, echoing the recent SFWA name change, ‘fan writers association’ rather than ‘fan writers of America’). Corflu also published Jiant Shoulders, a fanthology of FAAn life achievement award winners downloadable from corflu.org/Corflu39/.
• Maureen Kincaid Speller’s funeral ceremony on 20 October had a surprise visitor, a local cat that for some while sat near the coffin surveying the audience. The consensus was that Maureen would have liked that. [PK] 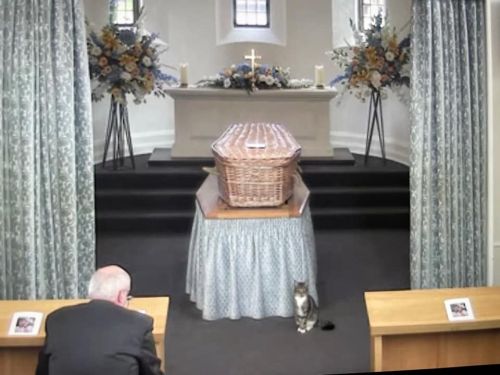 As Others Ponder Us. ‘It’s not hyperbole to say that sci-fi, fantasy, and horror remain chained in the dungeon of the literary meritocracy. But why? Why is speculative fiction considered inferior or unequal?’ (Kurt Fawver, ‘The Inevitability and Impossibility of Escapism in Speculative Fiction’, Academia Letters, April 2021) [IN]

Dark Net. Study of SF Encyclopedia web traffic reveals that somewhere out there is a bot that visits the entry for The Grateful Dead every five minutes, day and night, world without end. Why?

The Dead Past. 70 Years Ago, Roger Dard hailed Australia’s new Minister for Customs: ‘Operation Fantast [Ken Slater’s fanzine] has been banned, and as O.F.’s Australian representative I was raided by the police, on Customs orders, and subjected to a thorough interrogation. Genial, lovable Senator O’Sullivan meanwhile is joyously banning books which were never banned before in our history [...]. Alice in Wonderland, Campbell’s Who Goes There?, and all of A. Merritt’s books have already had the axe fall on them. We expect Grimm’s Fairy Tales to go at any time. / So you see, if any of you oppressed fans over there in the UK wanna know the joys of living in a really free country, why, just come to Australia.’ (Post War: Science Fantasy News letters supplement, Winter 1952)
• 40 Years Ago, the magazine climate was happier: ‘Interzone is now being guaranteed against loss, to the tune of £2000 promised by the Arts Council (in this present financial year)....’ (Ansible 30, November 1982)

Fanfundery. TAFF. Nominations are open (closing on 4 December) for a westbound race from Europe to Pemmi-con, the NASFiC or North American SF Convention in Winnipeg, Canada, July 2023. Voting runs from 9 December to 11 April. Official release at taff.org.uk.
• Free Ebooks. Current projects include TAWF Times Two, a joint volume of Walt and Madeleine Willis’s reports on their Tenth Anniversary Willis Fund trip to the 1962 Worldcon. Coming soon at taff.org.uk/ebooks.php?all.

Thog’s Masterclass. Erotica Dept, or All Thumbs. ‘“Christian Grey put his thumb in my mouth. And then the other one. And then two more. “Wider,” he said as he put in one more. “I bet you’ve never had this many thumbs in your mouth.” I hadn’t.’ (E.L. James, Fifty Shades of Grey, 2011) [Alas, Rose Fox tells me this is a fake quote. Thog grovels.]
• Something to Watch Over Me. ‘Under this sneeringly vigilant sky, Clements and Robertson stood bewildered.’ (Russell Kirk, ‘Skyberia’, Queen’s Quarterly, 1952) [LP]
• The Art of Understatement, or Cheese at Suppertime. ‘Shrieking, slithering, torrential shadows of red viscous madness chasing one another through endless, ensanguined corridors of purple fulgurous sky ... formless phantasms and kaleidoscopic mutations of a ghoulish, remembered scene; forests of monstrous overnourished oaks with serpent roots twisting and sucking unnameable juices from an earth verminous with millions of cannibal devils; mound-like tentacles groping from underground nuclei of polypous perversion ... insane lightning over malignant ivied walls and demon arcades choked with fungous vegetation ...’ (H.P. Lovecraft, ‘The Lurking Fear’, 1923)

Virtual Meetings.
• 17 November 2022, evening: London Zoom meeting, third Thursday of each month. ‘Please share this with people who you know typically come to the Bishop’s Finger, but aren’t on Facebook.’
https://bohemiancoast.medium.com/first-thursday-london-sf-fan-virtual-drinks-5232021e961f

Back from the Grave. As indicated by new posts since 31 October, Patrick Nielsen Hayden is working to restore his and Teresa’s long-dysfunctional blog Making Light from its limbo of broken links and failed CSS:
https://nielsenhayden.com/makinglight/index.html

Editorial. Madeleine Willis’s TAWF trip report (see ‘Fanfundery’ above) was serialized in Bruce Pelz’s APAzine The SpeleoBem, 1963-1966. It’s just possible that a last instalment appeared in SpeleoBem 35 in 1967 – an issue missing from the Fanac.org archive. If anyone has access to this and can check the contents, Rob Hansen and I would be very grateful.

All Change. The Fantasycon website at www.fantasycon.org, which never got around to linking to Fantasycon 2023 (see ‘Congeries’ events list above), is apparently being abandoned; its home page now tells visitors to go to www.britishfantasysociety.org. Where we learn, even on the site’s Fantasycon page, that ‘There are no upcoming events at this time.’

Thog’s Golden Oldies from Ansible 184, November 2002. Eyeballs in the Sky. ‘“Seigneur, I have invented forty new dishes for to-night's banquet,” Francois said pathetically, his eyes creeping out until they hung on the rims of their sockets like desperate people wavering on the edges of precipices.’ (George Viereck & Paul Eldridge, Salome the Wandering Jewess, 1930)
• Neat Tricks Dept. ‘They don't kill any of them but the women are – how you say – mutilated. Same way. And beheaded.’ (Charlee Jacob, ‘Bonerider’, in Decadence ed. Monica J. O'Rourke, 2002) • ‘Mark pulled Anna’s blue bikini top off her shoulders and slid them down to her waist.’ (Nicholas Kaufmann, ‘V.I.P. Room’, ibid)