Liu Cixin, China’s Mr Science Fiction, got into trouble when – thanks to the success of the film adaptation Wandering Earth – there was much sharing on social media of his 2015 interview that mentions writing lots of sf while working at a state-owned power station. ‘Everyone was sitting in front of a computer, and nobody knew what anyone else was doing ... You have to be in the office. But when you’re there, you are free to write.’ (Bloomberg News, 13 February) [F770] How your editor managed to write War in 2080 and a spoof UFO book while working full-time for the Ministry of Defence must remain an official secret.

Nick Lowe received the supreme literary accolade when a sentence from his Interzone 279 ‘Mutant Popcorn’ film column was enshrined in the venerable ‘Pseud’s Corner’ department of Private Eye (22 February). 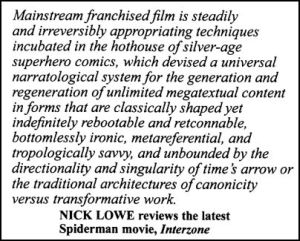 Eric Frank Russell would have enjoyed NASA’s plan to include an official comedian in their hypothetical future Mars mission, easing stress and uniting the astronaut team (Guardian, 15 February). [JS] The EFR story about just this is ‘A Little Oil’ (Galaxy magazine, October 1952).

Amélie Wen Zhao’s debut YA fantasy Blood Heir was met with much Twitter outrage – including accusations of plagiarism and racism – based on a few advance copies and a lot of people who piled on anyway despite not having read it. Zhao asked her publishers to cancel the book. According to an assessment at Vulture.com, ‘the plagiarism allegations are shaky at best – and the charge of racism, led by a series of caustic tweets from YA fantasy author L.L. McKinney, relies on both a subjective interpretation of the word “bronze” and an exclusively American reading of scenes involving slavery.’ (31 January) Oh dear.

11 Mar • John Wyndham event on the 50th anniversary of his death. 6pm for 6:15pm talk at his one-time home The Penn Club, 21-23 Bedford Place, London; later at The College Arms pub, 18 Store Street. Further details and poster at triffidalley.com/50_Anniversary.html.

As Others See Us. ‘The recovery of the past represents a sheer enrichment of human thought. It is a sort of time travel in which, unlike in science fiction in which we encounter generally pitiful creations of an ethnocentric imagination in alien worlds, we make acquaintance with fellow humans who represent aspects of ourselves which temporal and cultural boundaries have made impossible to actualize.’ (Miguel Civil, foreword to Samuel Noah Kramer’s In the World of Sumer, 1986) [PL]

The Weakest Link. Jeopardy answer requiring a question: ‘Aviation writer Robert Serling helped little bro Rod with “The Odyssey of Flight 33" episode of this series.’ Contestant: ‘What is Star Trek?’ [AIP]
• Bill Turnbull: ‘Which author wrote the novel Dracula in 1897?’ Contestant: ‘Well, I know Mary Shelley wrote Frankenstein, so maybe it was her husband, Tom Shelley.’ (Think Tank, BBC1)
• Joe Lycett: ‘In Life on Mars, David Bowie wonders if there was life on which planet?’ Contestant: ‘Hmm, Life on Mars.... Was it Jupiter?’ (The Time It Takes, BBC1) [PE]

Plagiarism Corner. When romance writer Cristianne Serruya was caught stealing easily identifiable passages from novels by other people, she ‘explained’ this was the fault of the ghostwriter she’d hired through the cheap-services site Fiverr. The Twitter hashtag #CopyPasteCris drew much attention, and perennial bestseller Nora Roberts aka J.D. Robb weighed in with an angry screed about theft of her material. Not only had Serruya’s offending novel Royal Love been submitted to the Romance Writers of America awards, but she herself was a judge in some categories: there were loud calls for the RWA to exclude ghosted works or at least insist that they be clearly identified as such. SF, fantasy and horror awards may yet face similar demands. [SG]

Small Press. Bad luck for ChiZine Publications, whose entire dealers’-room stock at Boskone (15-16 February) was mistakenly dumped on the freebies table and vanished with great speed. After the error was announced, about a third of the books were returned. [A-TC]

Outraged Letters. Klaus Æ. Mogensen writes: ‘On Friday, 15 February, the Copenhagen sf book and comic-book store Fantask announced that it would most likely close by the end of June after several years of running a deficit. Founded in 1971, Fantask is the world’s oldest still active sf bookstore. Upon hearing the news, a fan of the store started a GoFundMe raiser, and by noon the following Monday, more than £50,000 was collected. This monetary injection will allow Fantask to look for a new location where it is hoped the store will thrive better.’

Quotes from Boskone sent by Bob Devney: ‘Patrick Nielsen Hayden lets the mask slip for a single fatal instant: “I’m editor-in-chief at Tor Books. So I’m responsible for everything that’s wrong with science fiction. I also control the Hugo Awards.” ... John Clute: “I like 45-minute sentences.” ... Grady Hendrix: “Horror is a women’s genre going back to the 19th century. The boys are a late arrival.” ... Frank Wu [reading his own short story]: “Kailo brought a telescope to his largest left eye.”’

The Dead Past. 70 Years Ago, an unusual letter of complaint from a reader of the American Rocket Society journal: ‘.....the main thing wrong with s-f today is the fact that the editors write most of the stories. When you realise that the leading monthly s-f magazine comes out twelve times a year, and averages four and half stories per issue, with perhaps one half of them written by the editor, and the rest by leading “names”, it becomes apparent why they fall into ruts, or shall we say, “vortexes in hyper-space bunk”?’ (Science Fantasy News 2, March 1949)
• 20 Years Ago, a comment now sadly past its sell-by date: ‘Spot the living sf author in the BBC News website poll’s 10 Greatest Writers of the Millennium: Shakespeare (#1), Austen, Orwell, Dickens, Banks, Tolkien, Joyce, Dostoyevsky, Cervantes and Twain.’ (Ansible 140, March 1999)

Thog’s Masterclass. The Tell-Tale What? ‘Her insides loosen and her heart ricochets.’ (Sarah Vaughan, Anatomy of a Scandal, 2017) [PB]
• Neat Tricks Dept. ‘It was the same message Kinnear sent while we were together, though it took me longer to translate, distracted by the cursive swirls of his tongue.’ (Hayley Stone, ‘Cold Iron Comfort’, Apex #117, February 2019) [JM]
• If Looks Could Kill. ‘Beau Quicksilver’s tempered steel glance gouged the chief's countenance.’ (Florence M. Pettee, ‘Blistering Tongues’, 31 March 1923 Argosy) [DL]
• True Romance, or Promethea Unbound. ‘She shrugged, quivers manifest beneath the thin material of her blouse, the breasts, unbound, moving like oiled balloons.’ (E.C. Tubb, Eye of the Zodiac, 1975) [KÆM]

Editorial II. Every so often I have to remind some readers that the convention list in each monthly Ansible – see ‘Conoidal’ above – is confined to newly announced, significantly changed and more or less imminent events. The fuller list is far too long for the print edition (still a single sheet of A4) and can be found at news.ansible.uk.

Thog Redux. By diligent online research, Lee Gold has found a plausible origin for the chrysalis/caterpillar Thoggism attributed by Peter Haining to a novel that conspicuously does not contain it (see Ansible 379 for more). A ‘Northern News’ round-up in The Naturalist magazine for February 1910 has a snippet about Lord Walsingham presenting his collection of Microlepidoptera to the British Museum: ‘According to the Grand Magazine, “in after days he looked upon that evening as the date on which he burst from the chrysalis and became a caterpillar.” To this Punch naturally adds, “and the date lower down in his calendar, with the two red lines round it, marks the occasion when he finally burst into an egg.”’