Trademark Wars. On behalf of your editor and other concerned fans, fannish IP lawyer Simon Bradshaw asked BrewDog PLC about the intended scope of their ‘fanzine’ trademark application (see A373, A374). The response was a written assurance that ‘... we would not envisage ever taking action against writers and publishers of fanzines, even if such fanzines were about beer or beer related products.’ (3 September)
• SFWA has joined Douglas Phillips, author of the 2016 sf ‘Quantum Series’, in opposing a romance author’s 2018 application for a US trademark on ‘quantum series’. (SFWA.org, 7 September)

Stephen Baxter had a ‘so near and yet so far’ moment when Bradley Walsh of The Chase posed the question ‘Stephen Baxter’s The Time Ships was a sequel to which H.G. Wells novel?’ and the contestant replied ... ‘War of the Worlds.’ (ITV, 7 September)

Brett Graham was not best pleased to discover that with a single exception, every ‘chapter’ in No Clocks, Mirrors, or Windows by Steven Marshall (self-published for Amazon Kindle, 2018) was a verbatim plagiarism of a story by Brett Graham. (Facebook, 11-16 September) Even the epigraph was a pilfered Graham poem, while the solitary non-Graham piece proved to have been swiped from another author. Marshall, who has past form in this area, creatively changed some of the titles. The ebook has since been removed from sale at Amazon.

Ian McEwan will show sf writers how to do it in Machines Like Me (April 2019), whose ‘love triangle’ involving a male ‘synthetic human’ causes a ‘profound moral dilemma’. (Guardian, 28 September). Ground-breaking stuff, and it was doubtless very wrong of Graham Sleight to get the impression from the Guardian puff-piece that this will be ‘Lester del Rey’s “Helen O’Loy” (1938), but less good.’ (Twitter, 29 September)

Haruki Murakami withdrew from the shortlist of the Swedish ‘New Academy Prize’ (see A374), to be presented this month as an unofficial replacement for the scandal-ridden Nobel. Presumably he’d rather hold out for the real thing. The remaining shortlist: Neil Gaiman, Maryse Condé and Kim Thúy. (Guardian, 17 September) [PDF]

Philip Pullman has searched his famous writing shed in vain: ‘Lost: a green leather pen case, containing a Montblanc ballpoint pen and an ordinary pencil. I'm particularly attached to the pen, because I wrote His Dark Materials with it.’ (Twitter, 25 September)

Cat Rambo reported contact with alien ways of thought at DragonCon: ‘Best part of SFWA business meeting might have been the guy standing in the doorway who refused to come in and said, “I'm just here to burn down the Hugos,” at which point, several people mentioned that SFWA has no connection to the Hugos.’ (Twitter, 1 September)

8 Nov - 9 Dec • Fanatical: A Sci-Fi Convention Musical, Playground Theatre, London. Various ticket prices from £11 to £25 (£10 to £22 concessions) at theplaygroundtheatre.london/events/fanatical/. The description makes it sound a little bit like Galaxy Quest: The Musical.

As the FBI Saw Us. From a 1959 interview transcript found in Ray Bradbury’s FBI file: ‘[Martin] Berkeley stated that it has been his observation that some of the writers suspected of having Communist backgrounds have been writing in science fiction and it appears that science fiction may be a lucrative field for the introduction of Communist ideology.’ (Writers Under Surveillance: The FBI Files, 2018) [MMW]

Science Masterclass. ‘And when they do make it all the way down to Earth, meteorites strike at tremendous speeds – as much as 90,000 miles per second.’ (Kenneth C. Davis, Don't Know Much About Geography) [AT]

As Others See Us. Oona Chaplin on Doris Lessing’s Canopus in Argus sequence: ‘I suppose it falls under science fiction, although it is much more than that.’ (The Observer, 23 September) [JG]

Random Fandom. BSFA Awards: nominations (members only) have opened at bsfa.co.uk/bsfa-awards-2018/. Ebooks and works first published outside the UK or Ireland are now eligible for Best Novel.
• Camestros Felapton unveiled the Space Opera Cover Maker, which does what it says on the tin, at camfelapton.ihostfull.com. All results are in the public domain!
• Leroy Kettle authorized the reissue of his and John Brosnan’s non-bestselling The Dirty Movie Book (1988) as a free ebook at taff.org.uk. This treasury of steamy inside information (‘Did you know that Greta Garbo was a secret Australian, born Doris Pringle on a sheep station at Wanga Wanga?’) should become available in November if not before. Perhaps the most impressive prediction, seven years before the launch of SFX, was that magazine’s perennial cover gag: ‘I discovered that when he had seen the term SFX he had misread it as SEX.’

Magazine Scene. Space and Time is to close after 52 years of publication since it ‘no longer has enough subscribers to remain viable’, says editor-in-chief Hildy Silverman. Two more issues are planned. [L]

The Dead Past. 20 Years Ago, a riddle: ‘Q: What sort of idiots would beg your editor to drop everything and put together some gems from Thog's Masterclass at short notice to fill a slot in a discussion programme, and then cease all communication as soon as the sucker had agreed to this? A: The BBC World Service.’ (Ansible 135, October 1998) Also: ‘Classic Glamour Photography by Iain M. Banks. (1989, Amphoto; ISBN: 0817436723). Is there no end to the man's talents?’ (Ibid)

Pottermania. The Royal Mint’s 2016 limited edition of 50p coins showing characters from Beatrix Potter’s The Tale of Peter Rabbit has been doing well on eBay, with the silver version of Peter Rabbit himself selling for up to £1,000. (Banbury Guardian, 27 September)

Editorial. The ‘Art of the Gestetner’ exhibition listed above had its private view on 29 September, with unexpected – at least by me – champagne, and a select fan presence consisting of Pat Charnock (who had introduced the perpetrators to fandom), Rob Hansen (with issues of Epsilon and a battered old Gestetner as exhibits) and myself. Three whole display cases are devoted to fanzines as we know them, including in catalogue order Novae Terrae, Fantast, Hyphen, Duplicating Without Tears, Mike Moorcock’s Jazz Fan from 1957, Femizine, Stellar, Boonfark, DNQ, Bastion, Raffles, Placebo, Gambit, Burroughsania (that nice Mr Moorcock again), The Enchanted Duplicator, Scottishe and Warhoon 28 – though not Ansible since its early duplicated issues were produced on a R*neo. Elsewhere, an impressive two-colour cover depicting a space rocket proved to be from the in-house Gestetner Head Office News. As expected I deafly failed to comprehend the speeches made by the Mayor of Haringey (including Tottenham, former home of the mighty Gestetner factory), by Jonathan Gestetner (grandson of The Founder), and by Oscar Mac-Fall, a leader of the art group Alt Går Bra that organized all this. It is a proud and lonely thing.
• The Langford readership is set to expand to galactic proportions with the translation of my story ‘Different Kinds of Darkness’ into Klingon. First Shakespeare and now me. Well, a few others too.

Fanfundery. TAFF 2019: nominations for the 2019 eastbound race to the Dublin Worldcon open on 1 October 2018, closing 22 November; voting will run from 1 December to the closing date 22 April 2019. Candidates need three North American and two European nominators and must also provide a promotional platform of not more than 101 words plus $20 bond. Watch the skies at taff.org.uk for further announcements.

Thog’s Masterclass. Solid Geometry Dept. ‘So three-sided spheres do exist.’ (Nina George, The Little Paris Bookshop, 2015; trans Simon Pare 2016). [PB]
• The Physics of Funfair Rides. ‘The fall takes two and a half seconds, and as the ride brakes, passengers are subjected to a force equivalent to three and a half Gs. / In other words, when it lands each human body weighs more than three times as much as normal. / Body weight matters on the way down. / A person traveling at a speed of a hundred kilometers an hour weighs over twelve tons.’ (Erik Axl Sund, The Crow Girl, trans Neil Smith 2015) [PB]
• CSI Dept. ‘A hack collective had blown the images to one thousand percent in an attempt to isolate actual nipple pigmentation ...’ (John Sandford and Ctein, Saturn Run, 2015) [JC]
• Eyeballs in the Sky. ‘Ayo slides her eyes to the kitchen window and out towards the barn.’ ‘His eyes graze Urvisha’s huge suitcase.’ (both from Katie Khan, The Light Between Us, 2018) [AR]
• Dept of Post-Holocaust Prose. ‘A pang stings my throat at the memory of pigs.’ ‘I stare at her little head. Why are young adults’ heads so little?’ ‘His eyes gleam like succulent black holes.’ ‘Jean de Men stares at her. Is his smile losing its sureness, are his eyes starting to boil?’ ‘What kind of population emerges up among the stars? A wad of alabaster meated things driven only by appearance and entertainment.’ (all from Lidia Yuknavitch, The Book of Joan, 2017) [AR]

Rob Hansen has a 1 October blog post about the ‘Art of the Gestetner’ exhibition, with photographs, at www.fiawol.org.uk/fanstuff/Blog/. The fannish sections of the (heretically photocopied) catalogue can be seen at news.ansible.uk/images/big/fanex.gif – which, as Pat Charnock points out, omits a non-fanzine by UK fan Ken Cheslin that was displayed elsewhere. Photographs below all (except the last) taken by Tim Bowditch for Alt Går Bra and copyright © Alt Går Bra – many thanks to Oscar Mac-Fall for sending a selection from the official record. 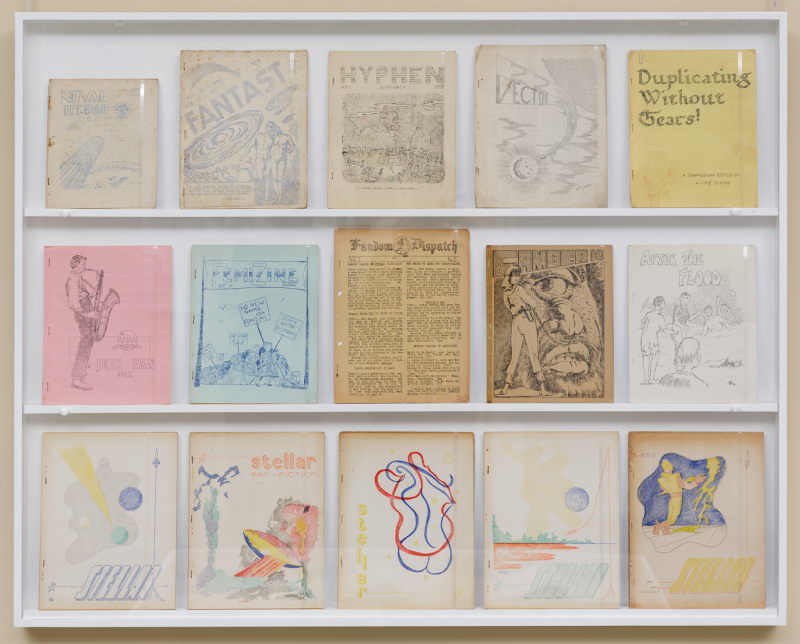 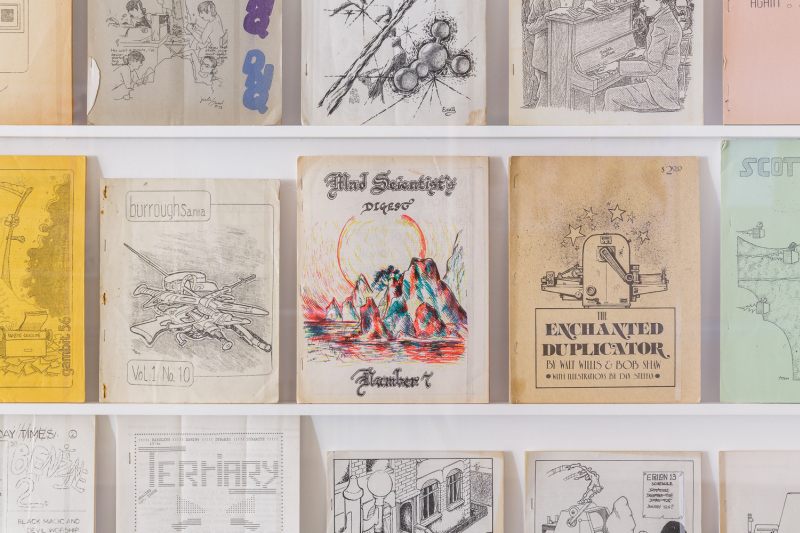 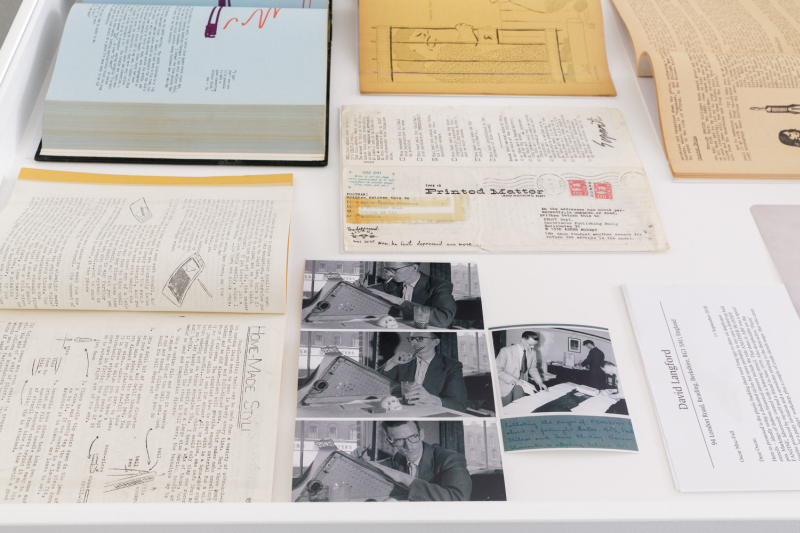 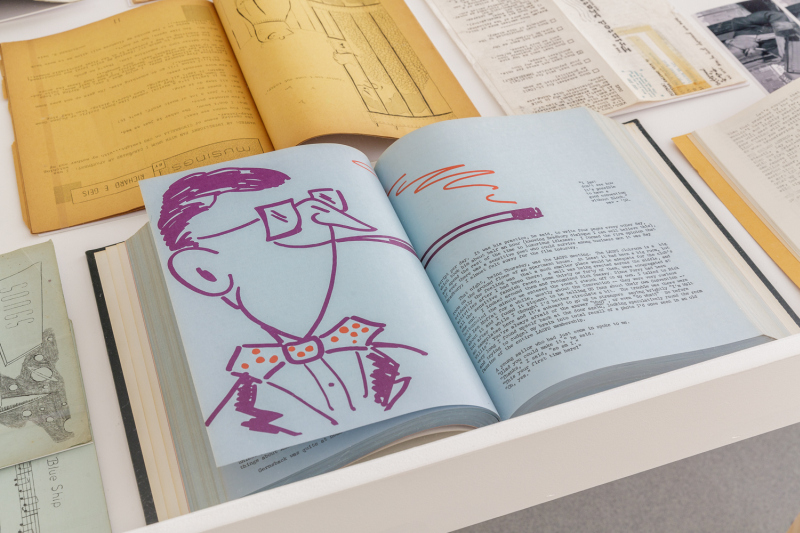 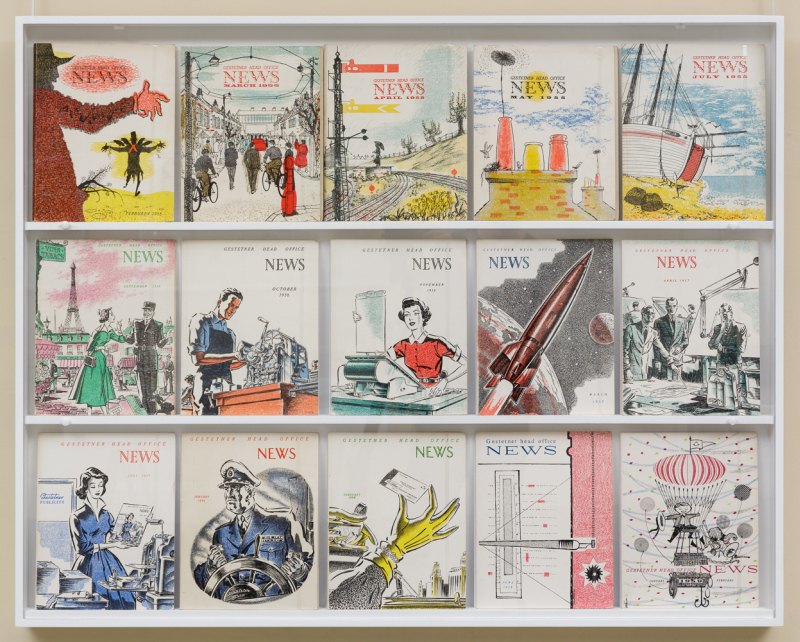 • Display #3 shows how the professionals do it: Gestetner Head Office News. 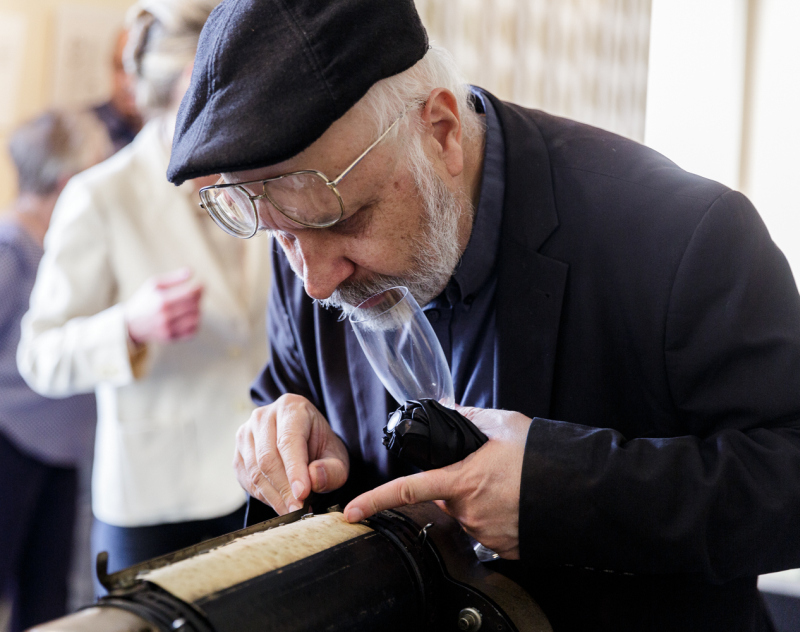 • Fanzine historian Rob Hansen (thus described in the catalogue) examines Display #4, an ancient 230 series Gestetner unearthed from his own cellar. 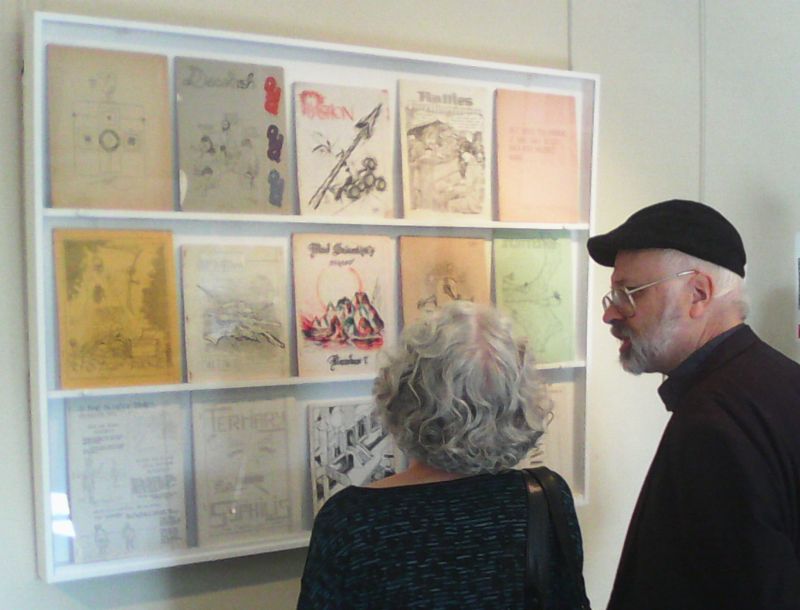 Gollancz Festival? As Ansible goes to press, www.gollanczfest.com is still showing exciting news of the 2017 event. Rather than a full-blown festival there is to be a Gollancz Writers’ Day on 2 November, with details to be announced soon.

Thog’s Second Helping. Metaphor Dept. ‘The sky exploded above them, a bruised flower.’ ‘Holly’s heart seemed to throw itself on to barbed wire.’ (Freda Warrington, A Dance in Blood Velvet, 1994) [BA]